Jazz was born at the end of the 19th-early 20th century, in the Southern states of the United States (mainly New Orleans), by the Black African-American community. During these centuries of servitude, slaves, uprooted from their native Africa, will seek ways to survive in these inhuman conditions. God and music will be their only comfort. To give themselves courage during their hard work, the slaves will sing songs accompanied by the rhythm of their tools. It’s called Worksongs. The white owners then teach their slaves their religious songs, which they will sing “to their own sauce”, which will give the spiritual negro (whose texts are inspired by episodes of the Bible or The Testaments), and later the gospel (whose text is free).

After the abolition of slavery in 1865, African-Americans began to learn to play instruments from the Old Continent, including violin and piano. Employment opportunities opened up for African-American musicians, but life remained particularly harsh, with segregation taking over from slavery. African-American Freemasons found employment only in the popular, even low-level entertainment industry: the minstrels show, cabarets, bars, clubs and brothels. It was in this context of the hot neighborhoods of New Orleans that the ragtime was born, syncopated music that would rhythmic the nights of the Louisiana dancers first then spread throughout the USA and give birth to the Jazz.

It was in Storyville, New Orleans ‘ hot district, that jazz was born. Brass and percussion instruments for fanfares, double bass, pianos and drums for club groups, will become the basic instruments of the New Orleans (black) / Dixieland (white) style, the first style of Jazz. In this New Orleans jazz, the trumpet plays the melody or variations of it, while the other brass improvises around this melodic line, while the stringed instruments pass into the rhythmic section. This transition from brass to the foreground is attributed to Jazz legend Buddy Bolden, a brilliant cornet player who learned his art at an early age in the black orchestras of New Orleans.

In 1917 The Original Dixieland Jass Band recorded the first jazz record: it was “white” jazz. In 1914, when carelessness prevailed over Storyville and its enraged Music, World War I broke out. New Orleans became a port of war where many soldiers were stationed or stationed awaiting boarding. In 1917, the Navy closed Storyville many musicians went to look for work in other cities: Chicago of course, but also New York and Kansas City.

Out of necessity, or not opportunism, the New Orleans musicians spread across the United States, Chicago and New York become new capitals of jazz. By the end of the first World War, the US economy was booming. Chicago being the most accessible city and with jobs to provide, it is this one that will host the most New Orleans jazz musicians. From their presence, the Chicago Dixieland was born, under the impulse, among others, of Louis Armstrong with his Hot Five, or Jelly Roll Morton and his Red Hot Peppers.

Then come the 1920s and their lot of extravagances, a wind of light madness blows over an America whose wall of puritanism reveals some cracks. Prohibition was then introduced, a vain attempt to plug the gaps; it was abandoned in 1933. Indeed, many Americans are willing to break the law in order to drink alcohol, and the mafia is happy to provide supplies. Prohibition thus promotes the expansion of jazz. Speakeasy (English: “speakeasy”), a chic underground bar, blossoms here and there. Under the guise of a restaurant or a concert of … jazz, the customers come to satisfy their passion for alcoholic beverages. Police raids are frequent but often announced in advance, forcing corruption. This phenomenon will contribute to the sulfurous reputation of jazz, which is considered by some well-thinking elite to be immoral.

The 1930s, in spite of the terrible crisis of 1929 that the United States would take years to overcome, was the decade that fully consecrated jazz as music in its own right. This recognition is made through swing (or hot jazz; it was the BBC who invented the term swing), a style of jazz which is characterized by a rhythmic section composed of percussions and double bass, on which brass and other wind instruments express themselves. With performances taking place in ever-larger venues (the end of prohibition in 1933 brought jazz out of semi-clandestine), the only solution at the time was to add more and more Musicians, which was how the first big bands were born. The first swing band is credited to Fletcher Henderson.

This is how the number of musicians explodes, the jazz swing orchestras regularly count more than 20 members yet, the big band allows each instrumentalist to express himself in solo. It was also the period in which jazz orchestras became racially mixed: Blacks joined White orchestras and vice versa.

The jazz swing ensembles are made up of a large number of musicians. It became very difficult for these groups to tour in this war context, especially as their members did not escape mobilization. The Second World War transformed jazz swing: festive music, dedicated to dance, into the music of musicians, which gave the jazzmen the opportunity to display their virtuosity, to experiment, to let their creativity and imagination run free: the bebop was born.

The improvisation, already existing in the swing, takes a preponderant place in the bebop, the musicians can leave free to their imagination what is difficult to achieve with a large jazz Orchestra whose objective was to make the crowd dance. The rhythms accelerate, the music becomes nervous, more syncopated. 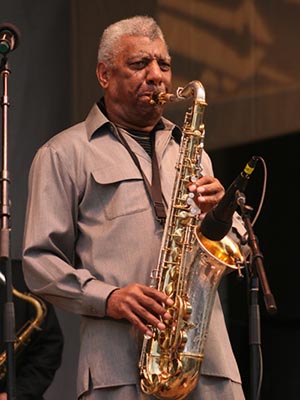